“When your gaze is lost before the unreachable, you often discover that you are searching within yourself.” 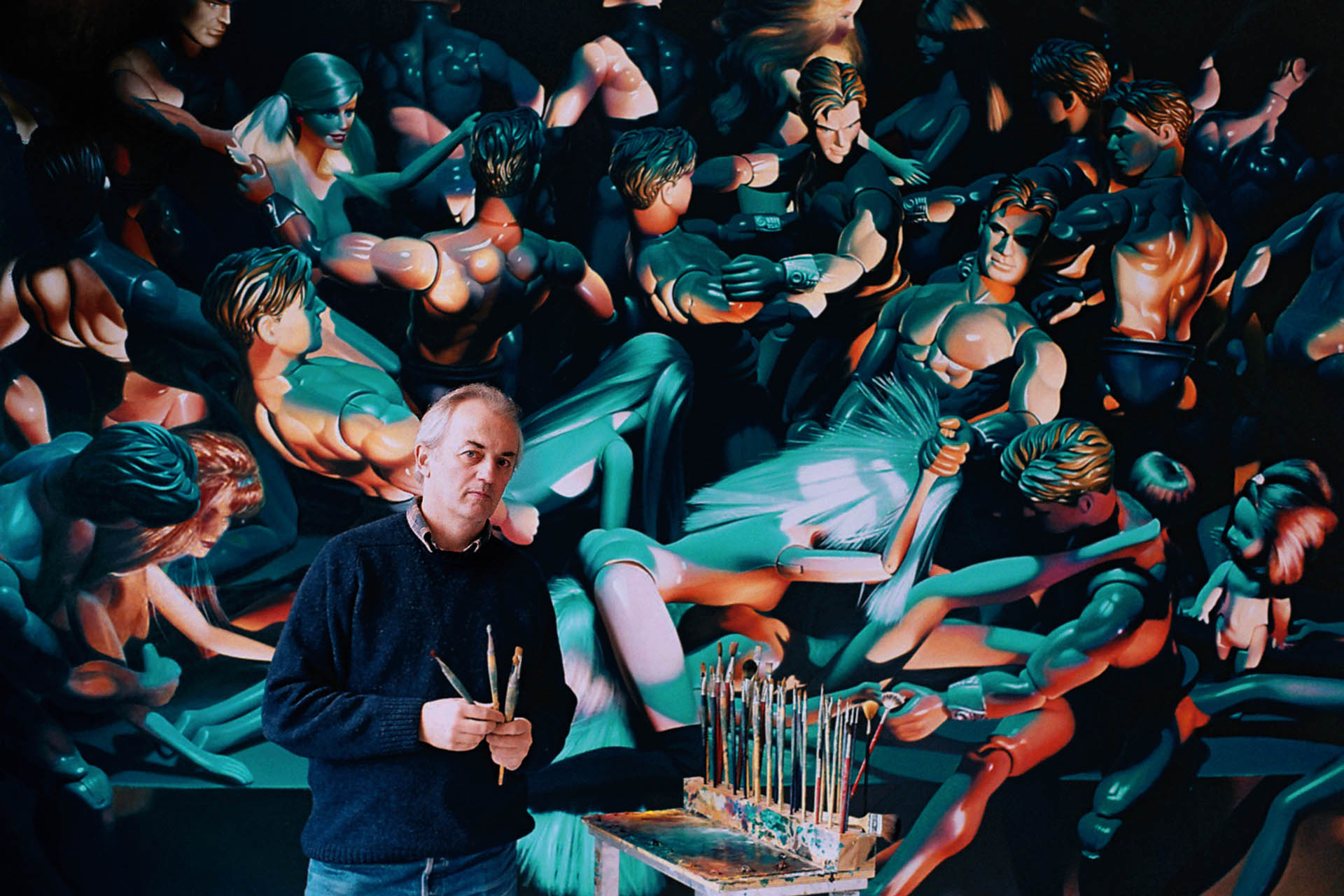 Gerardo Trotti was born in Argentina, in 1954 and considers himself as being defined by the immensity of the South. There, he felt the strength of the pampas, the storms and the loneliness of the almost completely uninhabited prairies. He has never felt that connection with nature again, but he has never forgotten it either and no doubt, it has affected his progress in life, personally and artistically.

Many other elements crossed his path that left a mark: a primary education under a European religious order, which affected the way he sees the Western world; the lack of artistic alternatives during his youth which prompted him to look to architecture as an employment solution; the military governments, the fear, the disappeared, and other things impossible to understand.

“It was a very difficult period. At the Catholic University of Cordoba we lived very exciting moments but outside, things that caused a lot of anguish were taking place. When I arrived in Europe I continued to feel threatened when I saw the police and my friends used to try to calm me down by telling me that here they would not harm you.” 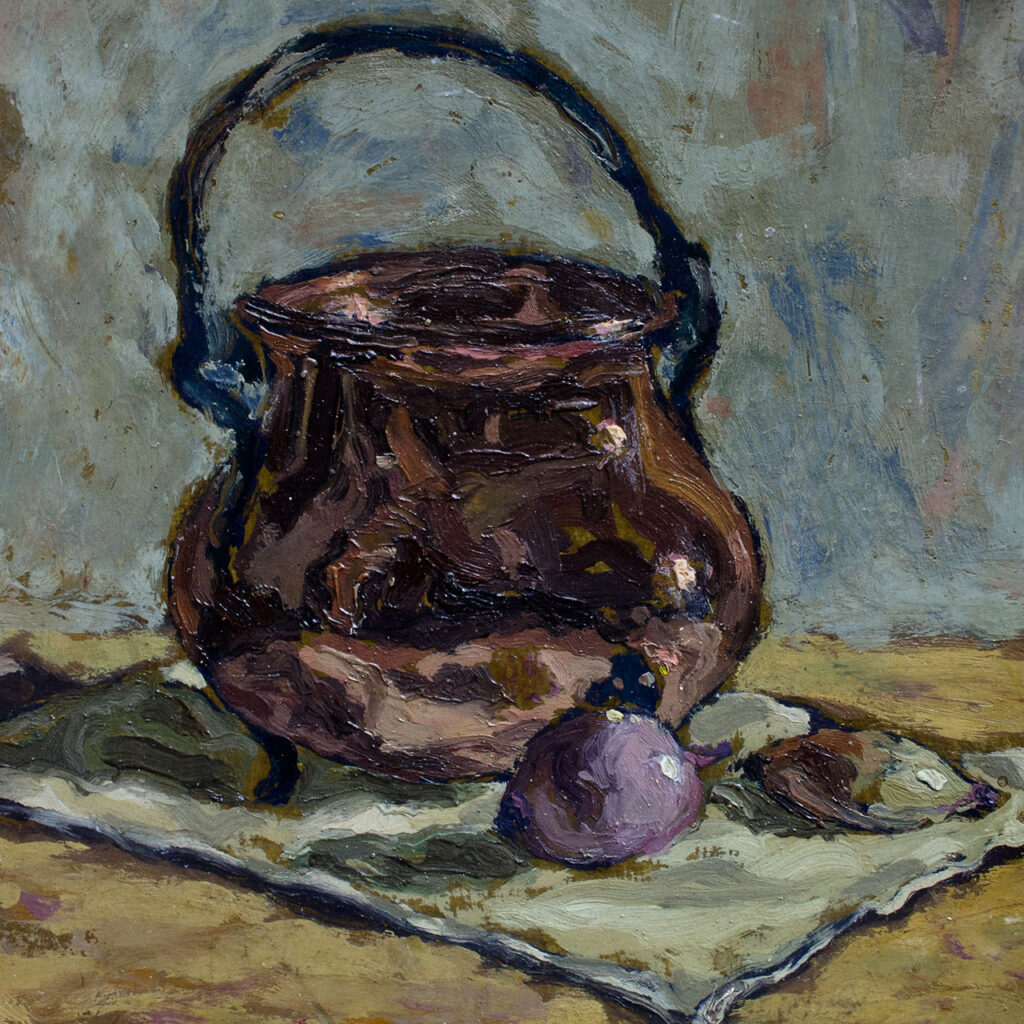 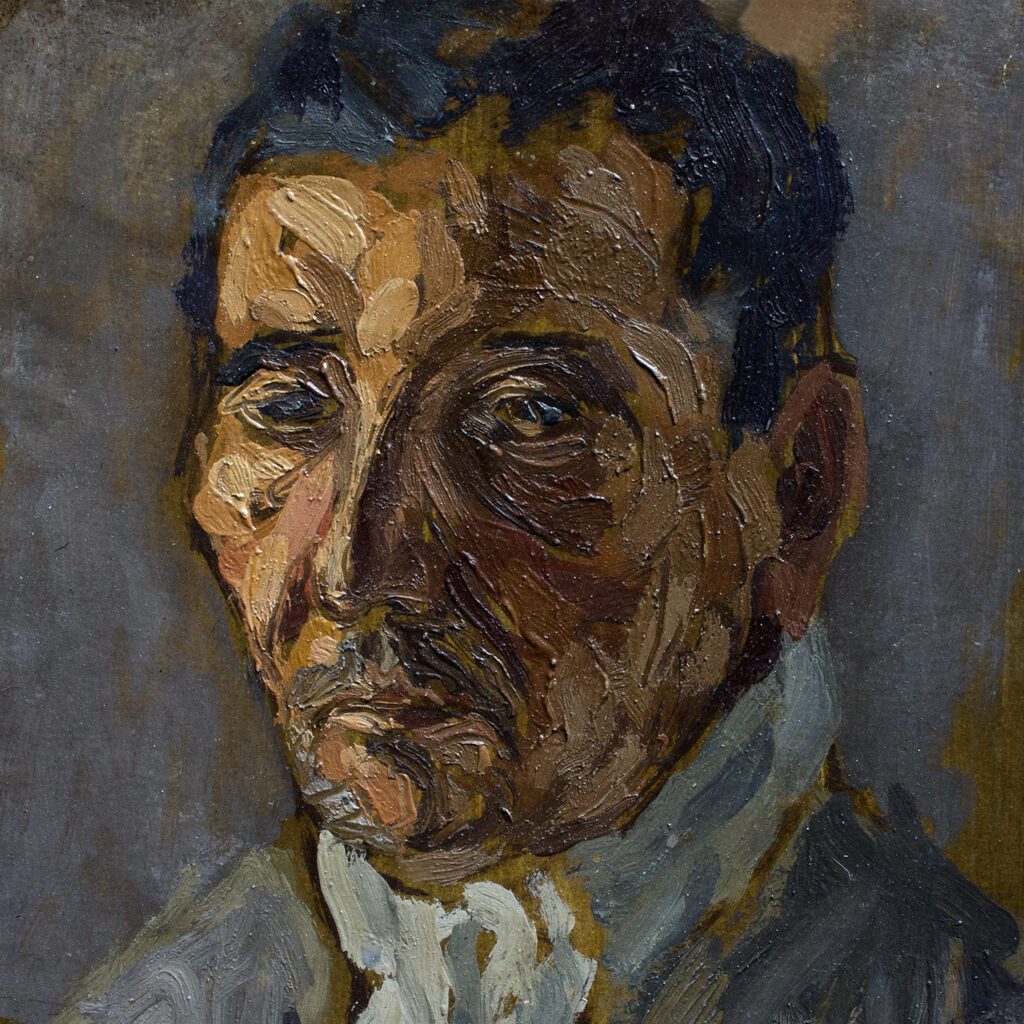 But, going back, his early interest in art began to find a path when, at age thirteen, he became a student of Miguel Pablo Borgarello, who was a supporter and director of the Municipal School of Fine Arts in San Francisco, in the Argentine province of Cordoba. Borgarello enjoyed a very successful career marked by much recognition and many prizes. Under him, Trotti learned painting, sculpture and engraving and also that art and artists have no borders.

He then moved to the city of Cordoba to study architecture at the Catholic University where Cesar Naselli, one of his greatest and dearest teachers, left a mark on the young Trotti. In spite of this decision to take a different path, he never abandoned painting.

He worked to pay for his studies and lived in many different places, among them the Convento de Santo Domingo, then an abandoned structure. “It was a great experience; the courtyards were a peaceful oasis in the midst of the city, a real gift. I made some paintings of the convent and, at age twenty, I had my first individual show”.

Deeply committed, as in everything he does, he received the prize as the best graduate of his class and for a while, he worked as an architect. The political situation and his interest in his own personal development encouraged him to leave for Europe, with the idea of pursuing a master’s degree in architecture in London.

“I left a life with an uncertain future and landed in Madrid, on my way to London. I had a free week and I went directly to the Museo del Prado. Contemplating the greatest painters in the history of mankind had such an impact on me that those few days seemed like ten years. Goya, Tiziano, El Greco, Velázquez… A profound artistic experience I never could have imagined”.

In 1981 and, already in London, Trotti was touched by the energy of Los Picasso de Picasso, a show at the Hayward Gallery, and by The Great Japan Exhibition, at the Royal Academy of Arts, that brought him “like in a dream, to the Western world and its great culture”. The greatness of art as an expression of the universal human being became forever part of his soul.

“That encounter with Picasso was an experience marked by a creative force, artistic intentions, human visions, forms and content… It was the artist and his incredible work that showed me his vision of the world and his relationship with life”. 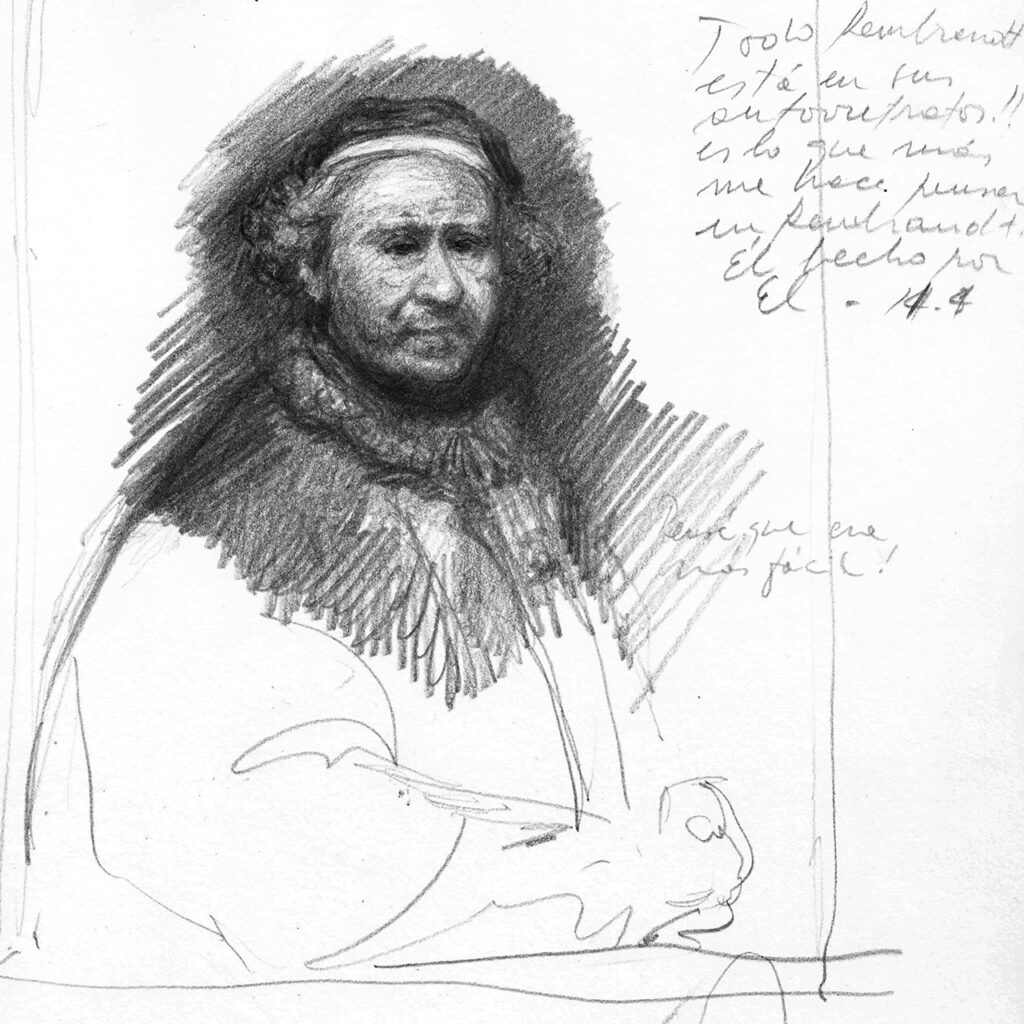 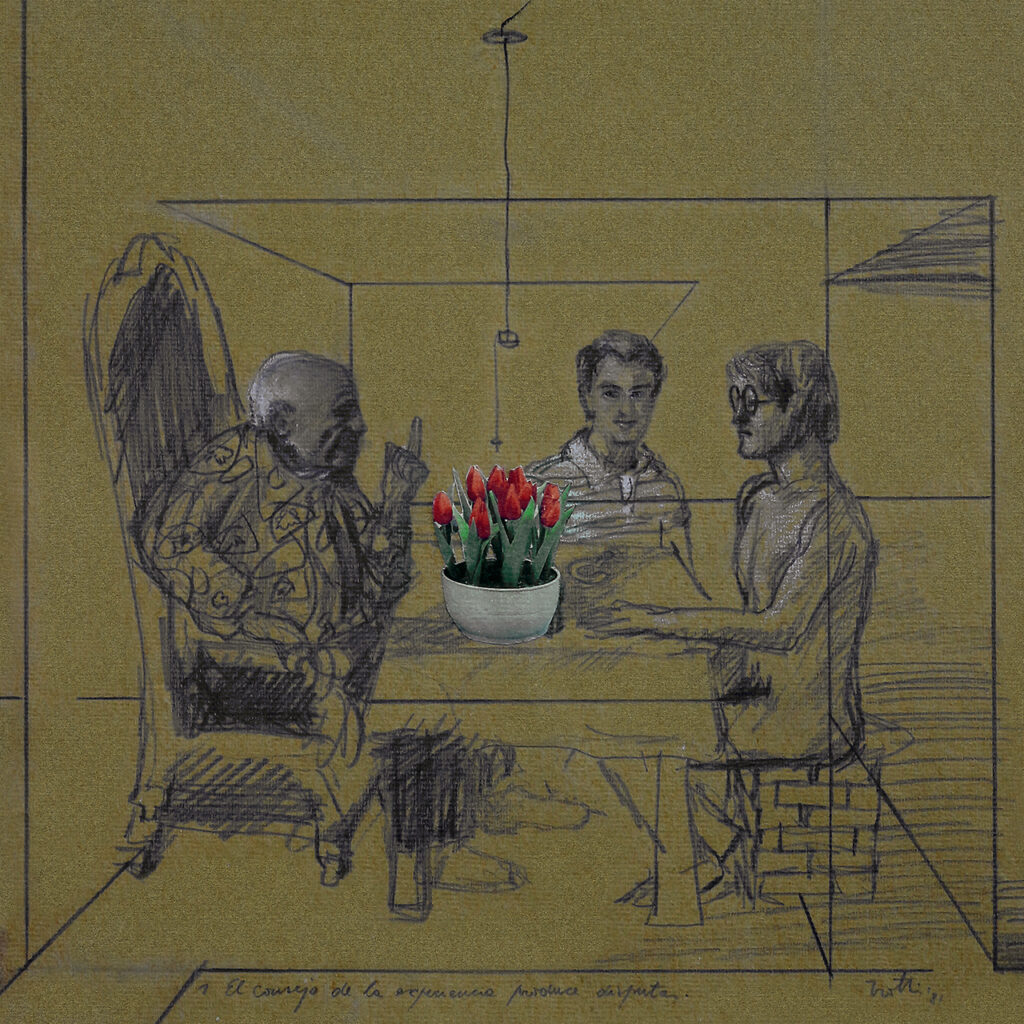 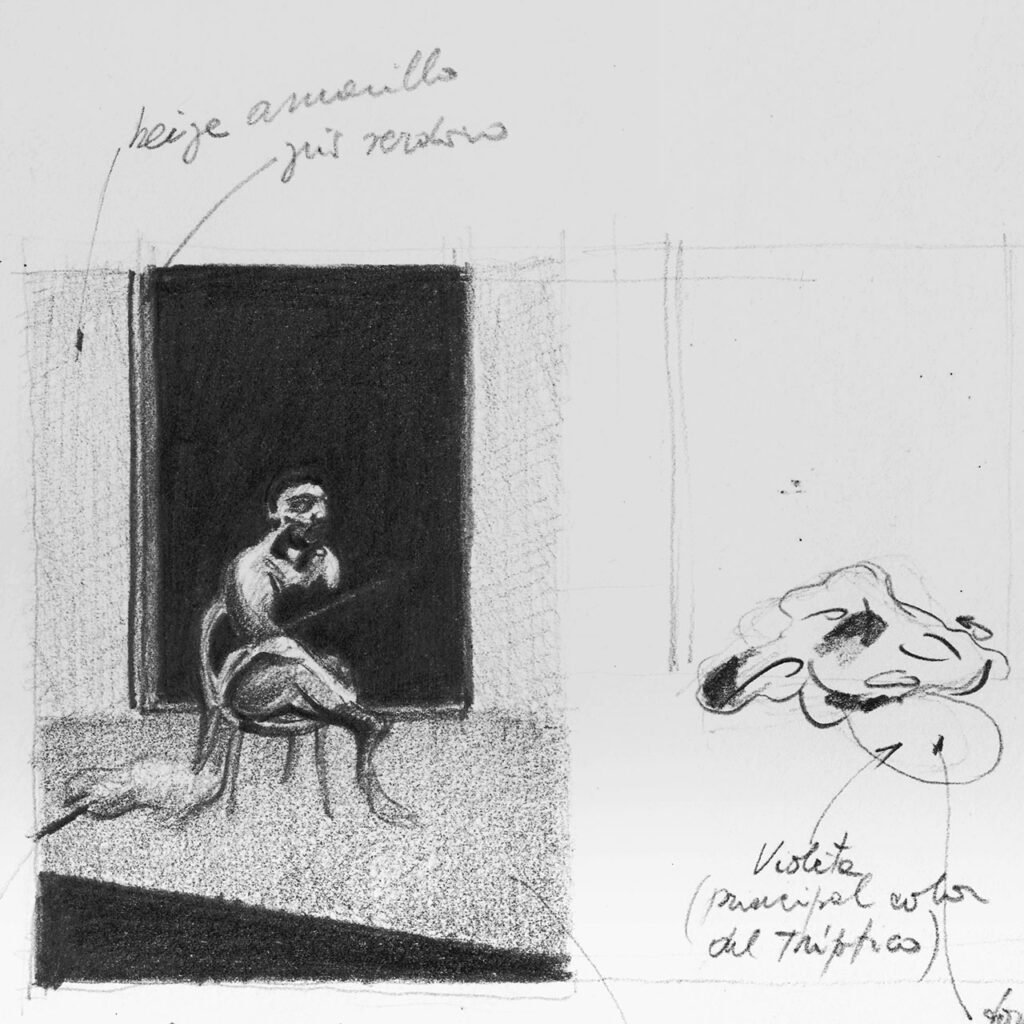 When presenting himself to the Architectural Association to discuss his plans, he was asked about his real interest: architecture, art? A new path emerged as a result of having to confront that question.

Of the six months that he spent in London, more than four of them were used visiting museums, learning, studying the work of great artists, such as Rembrandt, Turner, Vermeer, Blake, the Italian Renaissance artists, the pre-Raphaelites, the Impressionists… but also Bacon, Rothko and Hockney. The idea of the master’s in architecture lost its appeal while painting started to occupy all his vital space.

"That encounter with Picasso was an experience marked by a creative force." 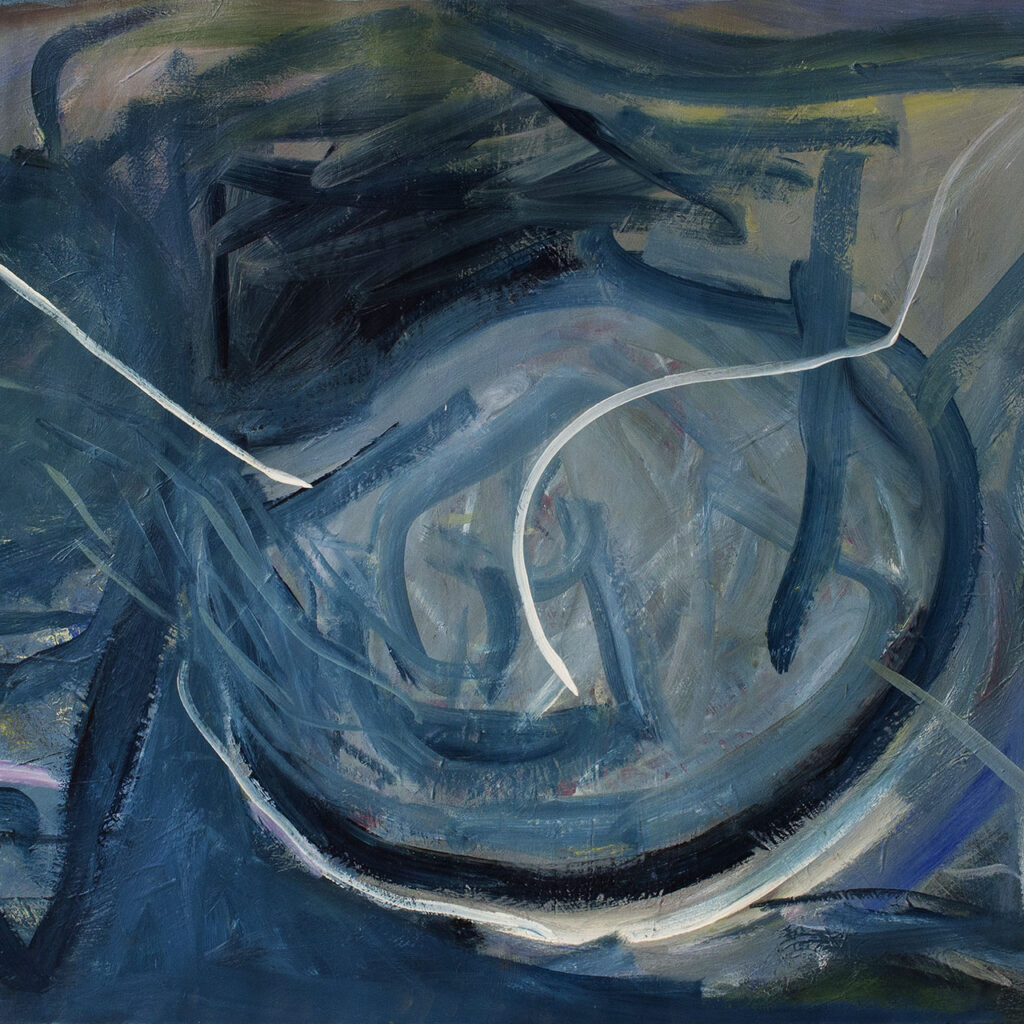 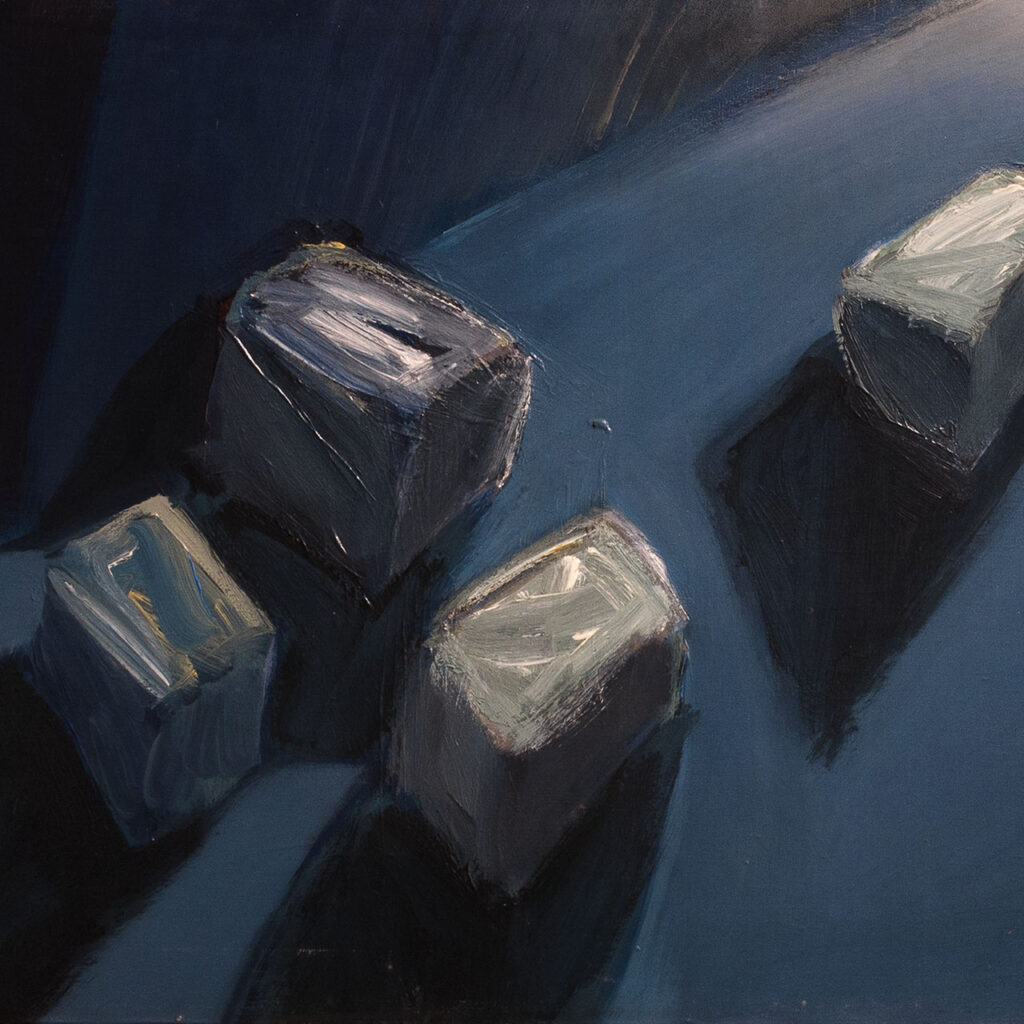 “Those images, that at first, spoke of themes and styles, techniques and colors, spaces and compositions and that showed me the beauty and the truth of their periods, continued to grow within me, providing new and mysterious meanings.”

He then moved on to Paris, to a small room in a Montmartre hotel, where he would spend four years painting and drawing. Again, the accepting museums became his best travel companions, Medieval, Renaissance or Baroque works, paintings from the nineteenth century to the movements of the twentieth. A complete spiral of artistic and personal motivation prompted by the universal themes that are part of the world of art.

“I dedicated myself to a tribute to Picasso and, at the time, was part of a few group expositions. After winning a small format painting competition, organized by the Espacio Latinoamericano, I had my second individual show. I called it Los Orígenes (The Origins), inspired by the idea of fertilization and the creation of life”.

His work ranged from realism to the abstract, passing through different “isms” where Trotti sometimes felt persecuted and at other times, encouraged. A period of religious, mythological and everyday images that little by little, started to close in upon themselves, even in a physical sense. In his work began to appear the images of boxes, “like suitcases that established between them spatial relationships within a room”, which ended up being his own.

In 1985, the artist started to feel that he was not in the right place and began to think of Spain as a better connection between Europe and Latin America. When he arrived in Bilbao, he only had two suitcases: one, small, with his personal belongings, and the other, much larger, with his works. Those boxes that unconsciously preceded the decision to move now became stones.

In Madrid, he started to work on things that would help support him, and at the same time, continue forward with his great passion, painting. He worked on designs for international shows, and became founder of a workshop that would be in operation between 1988 and 2003. Within a brief period of time, he received important assignments for theatre and opera. In the world of scenography he experimented with materials, forms and textures and enjoyed a new chapter that would be very fruitful, in Spain and in other countries.

“Scenography is, at the same time, craftsmanship and technology, and it has a lot to do with art, in fact with the relationship between time and space, which is experienced in a very particular way in theatre and prompted in me new ideas to propel my work. It also allowed me to establish a relationship with painters like Goya and Velázquez”. 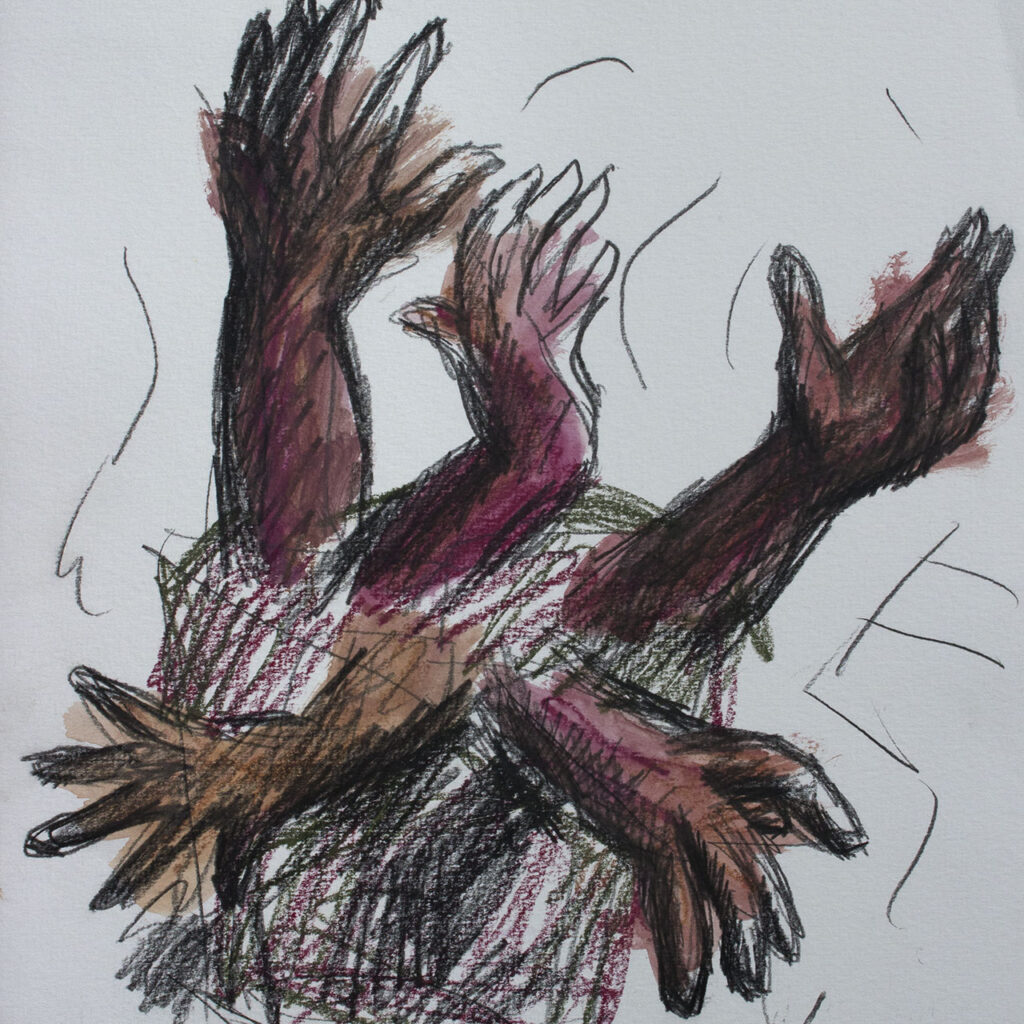 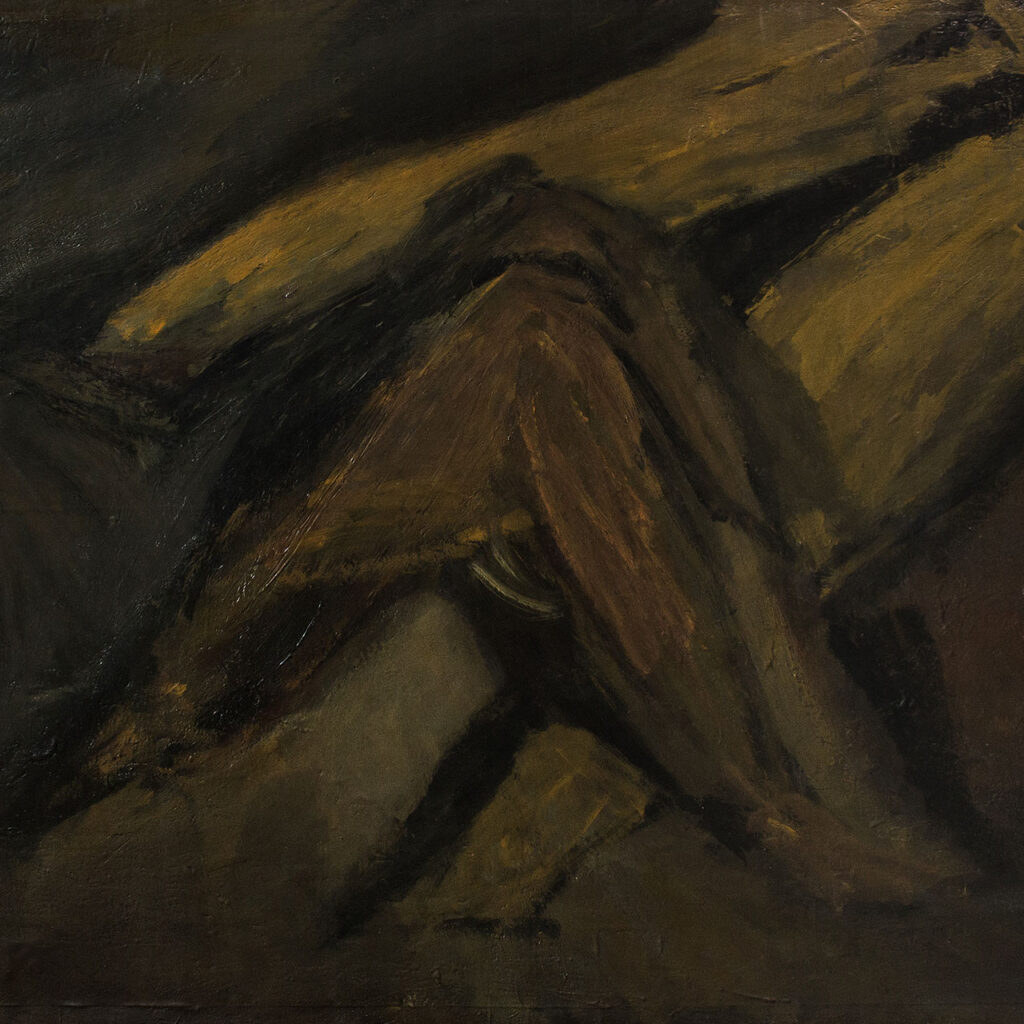 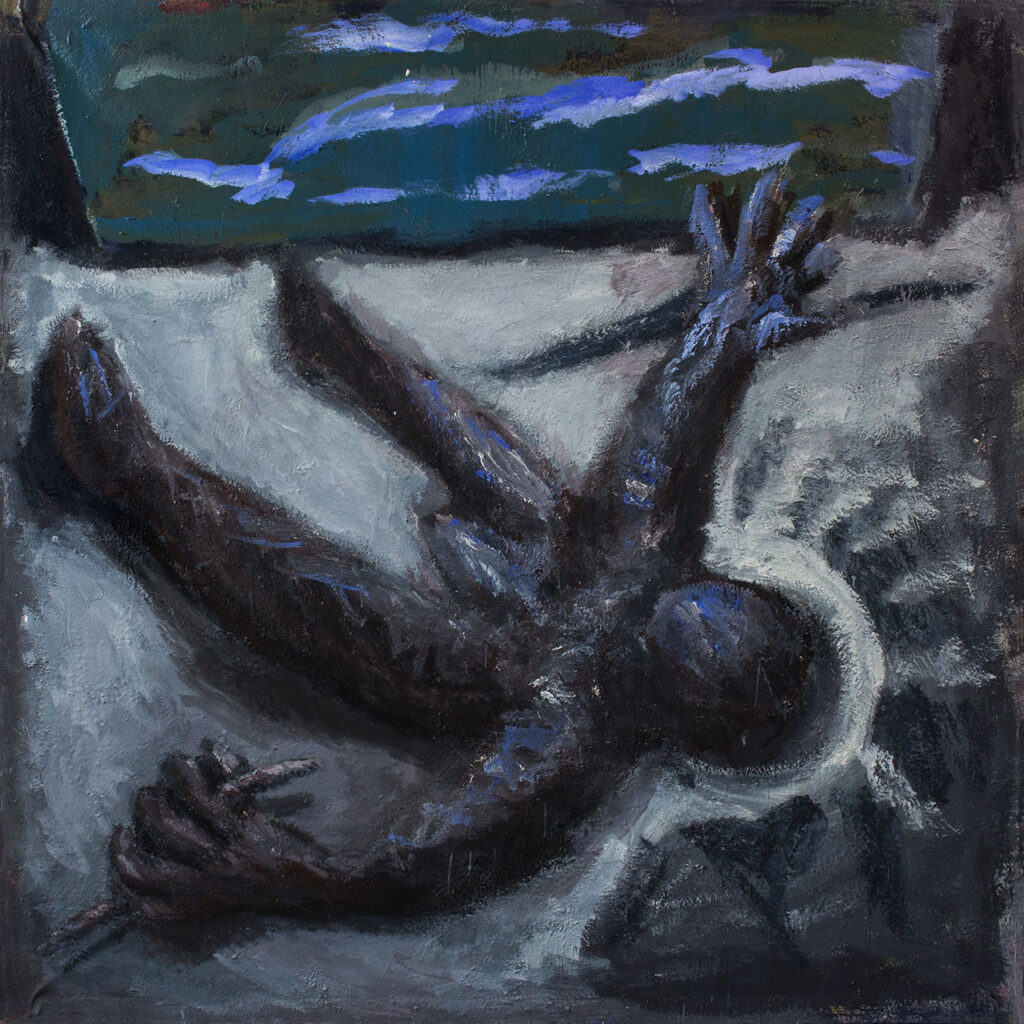 As always, his artistic path was intimate, far from the marketplace. On the one hand, the exploration of the human being through art continued to be a way to explore himself that, at the time, he did not need to share; on the other hand, he understood that isolation as an absolute degree of creative freedom, where nothing or no one could interfere and control his evolution or his processes.

During that period, he traveled several times to Argentina and found himself walking again on those great prairies of his childhood, among the cattle and observing the space between the animals and their function within the herds. He started to propose new relationships among human beings in his work with a larger number of characters, studying and recreating the universal themes of western art that continued to attract him. 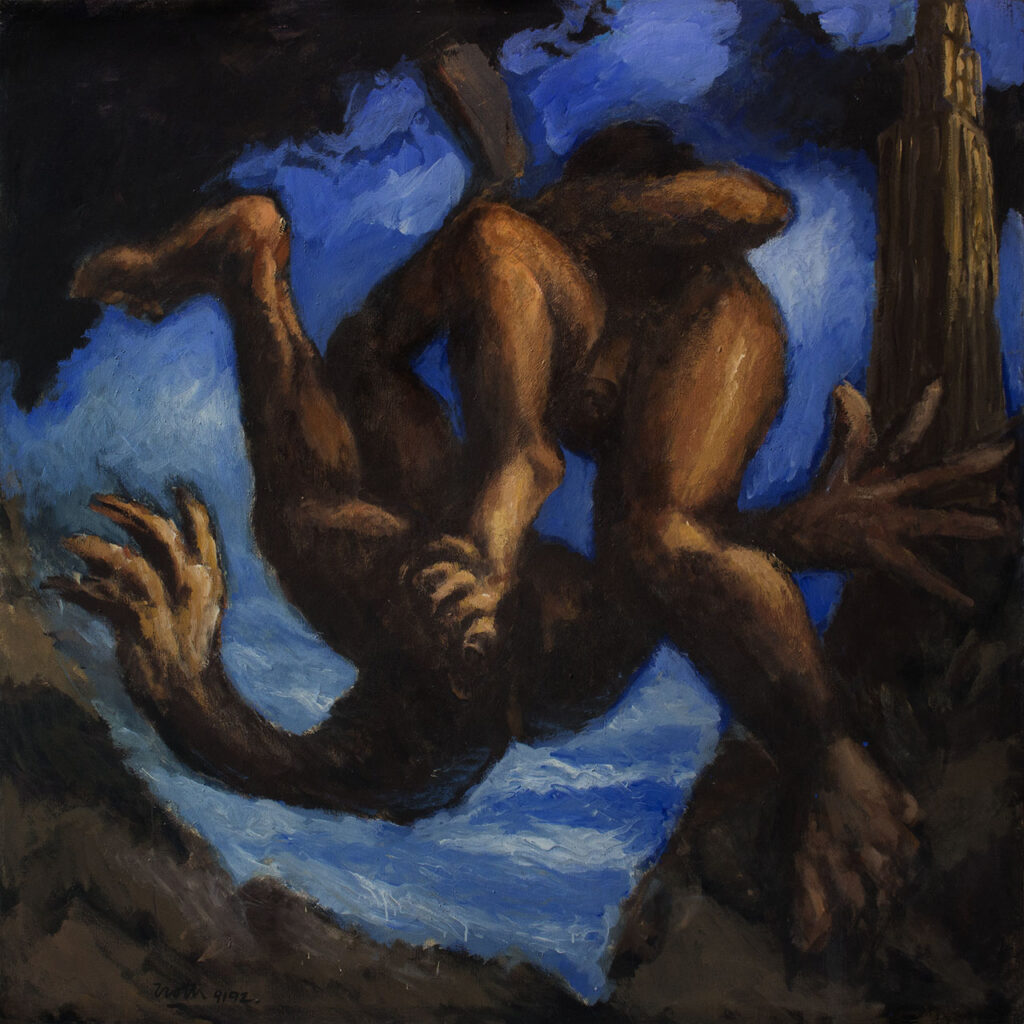 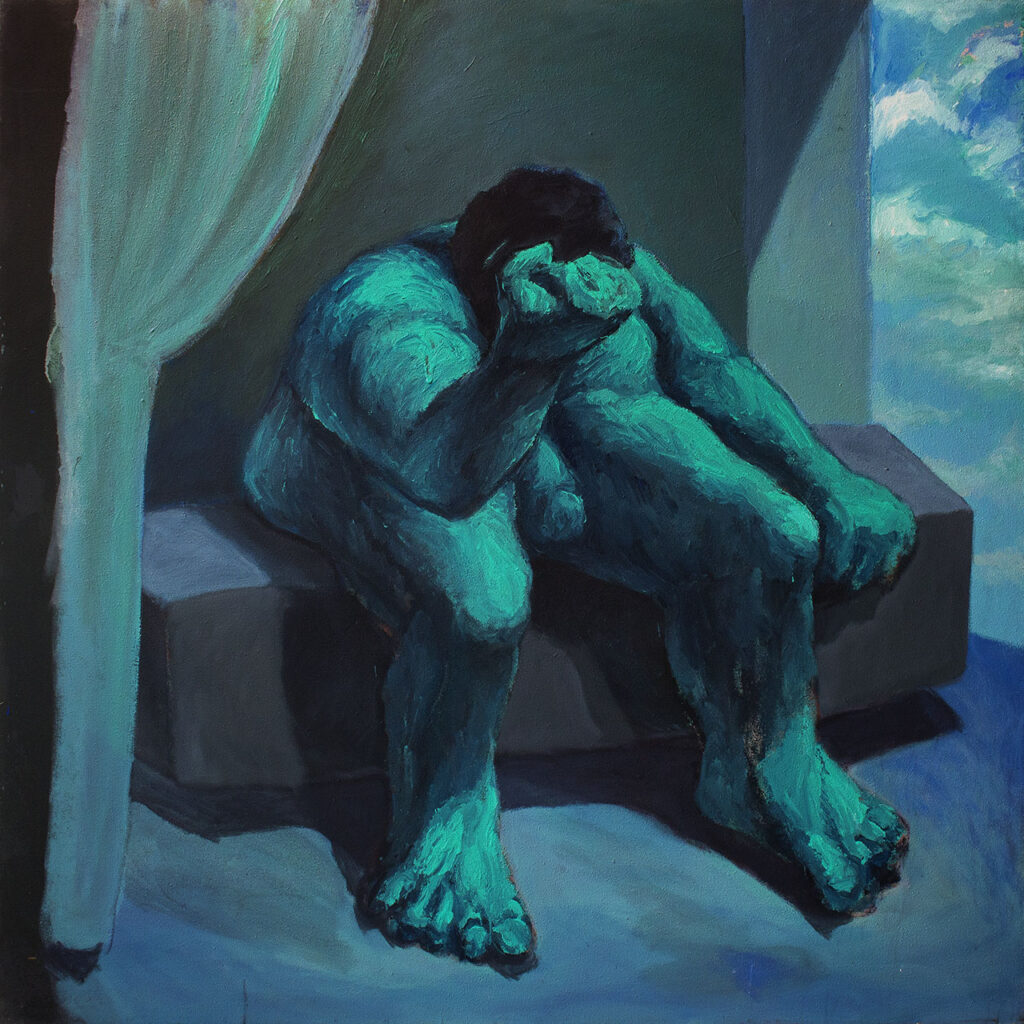 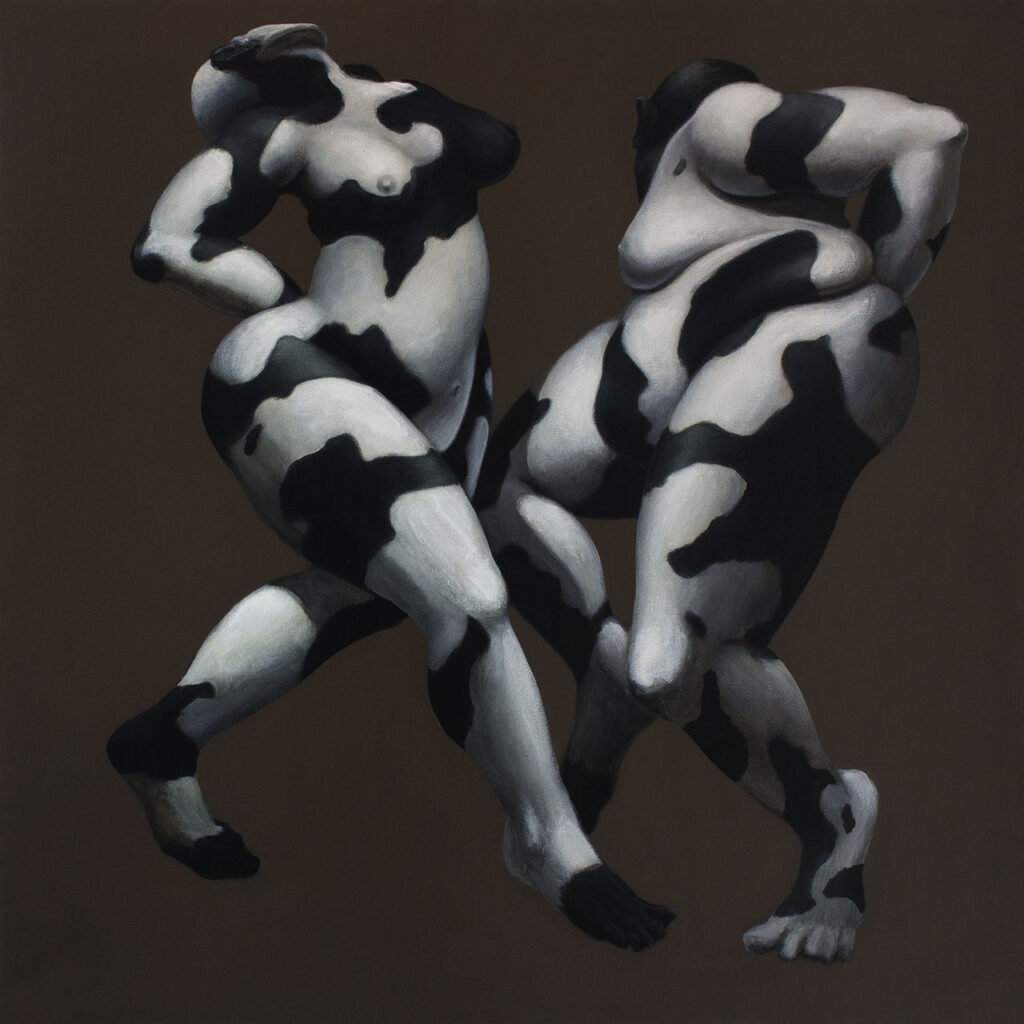 “The inconclusive bodies, that at some point I even called human animals, started to look for the group and in those discoveries I found secret and manifest intents. I then started to paint groups with complete bodies, but still without a face, as a reflection of a society where human beings are always isolated and relationships are always selfish.”
The classic jointed figurine used in drawing classes became the foundation of his compositions until, “on that existential path” and while holding his son’s hands, he found “the modern doll of shiny plastic, a stereotype of perfection, without an emotional charge, conscience, or moral commitment.”

“From that moment on, I decided to use it as a unit of spatial occupation. I started to form volumetric acts in singular spaces, using strong male bodies and beautiful female models and, currently, I continue to develop the process that I discovered with the dolls. When I look at my evolution I discover that, without knowing, everything was bringing me to Simultaneity.”

The isolation with which he has always worked is intensified when he began his Simultaneity project; he felt the need to abandon the rest of his activities and spent eight years working on it. The result is a set of “four paintings of large format, inside a darkened room, that compulsively modify themselves, altering their original state through artificial lighting.” An immersive experience, where, at times, the spectator recognizes what he sees but that also goes a lot further, touching on illusion, emotion, drama and, as it cannot be otherwise, references to universal art.

Paradoxically, this project assumes an inflection point for Gerardo Trotti, a break with the way of thinking that has always brought him to individualism. From a creative and personal standpoint, the path has been long and difficult, but now is the time when he finds sense in sharing his work. 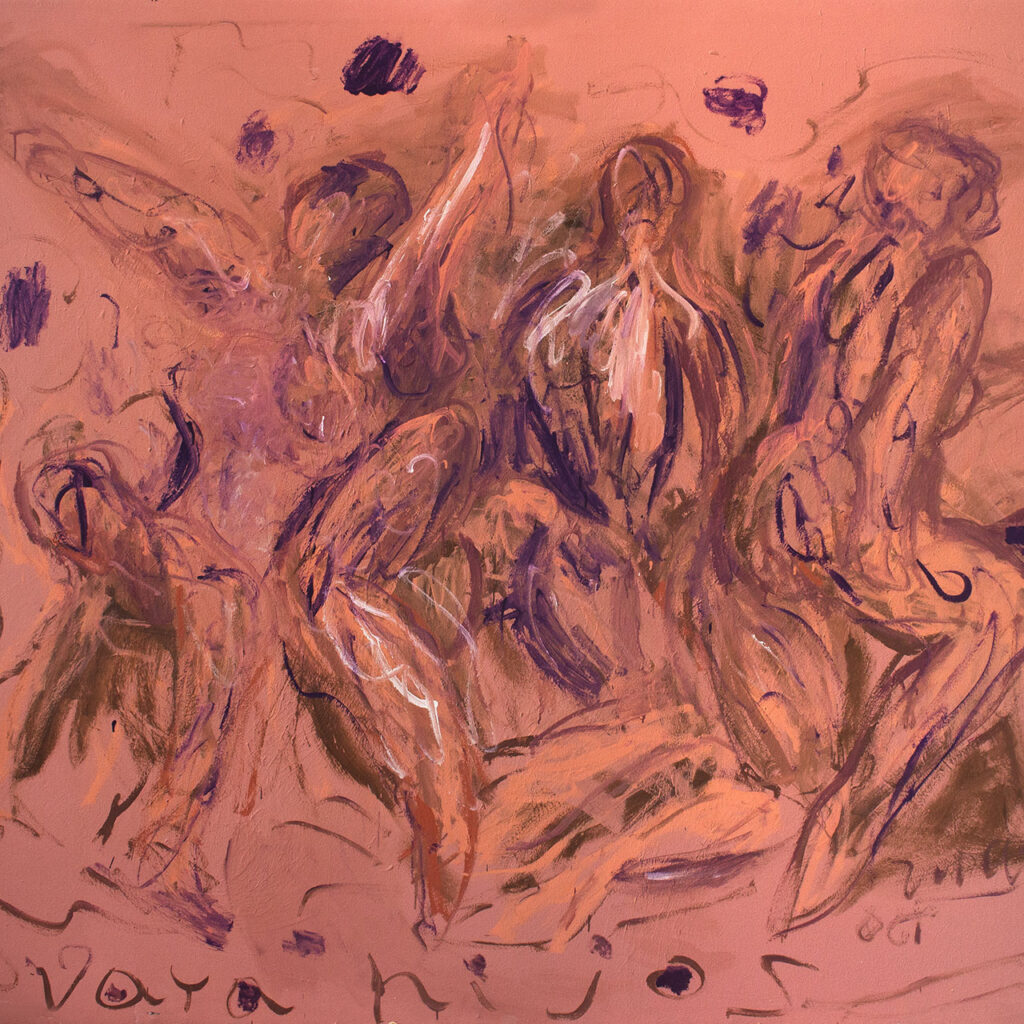 “I believe an artist has always had and will always have a personal search, he does not create for others but for himself. But at the same time, we cannot isolate ourselves from the rest. I needed a lot of strength and courage, but with Simultaneity I have allowed myself to see that, even if the work is an individual exercise, that same work is the link with life.”

From the courage of following the process, Armonías was born.

In spite of this decision to take a different path,
he never abandoned painting.